GUI/Controls
· You can now choose to use last-mouse movement as your way to decide what direction to strike from rather than using strafe; this can be toggled from options.
· You can now have the game take you out of mouse mode as soon as you don't move (auto-running won't turn it off).
· All items in-game now have a color connected to them, this color will be used to calculate the color for potions and dyes.
· Added support for full head-tracking on all mobs and NPC's.
· "/" will now focus the chat and start a string with "/" Every skill that has an icon can now be triggerd using /skill <skillname> in the chat-window. This is mainly added to support the new macros. Every spell can now be triggered using /cast <spellname> in the chat-window. The amount of time you need to charge a weapon before it gets a charged bonus to its damage, is now directly related to the length of the weapon.
· Added support to turn off the gore & nudity.
· Built a more user friendly "R" system for using workbenches. You can now simply press use while targeting a workbench to trigger the skill. If there are several skills that you have that can be used on that workbench a window will pop-up with icons for each skill to let you choose.
· You can now push other player’s pets to have them move out of the way. They will move away for a while and then go back to their original spot.
· Added new action combine, this will open a simple window where you can try to add one item to another. Useful for adding potions from one vial to another, and to create new potion effects such as purify.
· Added /useitemslot <slotNr> command to the chat. This will use the item in your backpack that is found on slot <slotNr> if that item is a bag it will use the first available item in that bag.


Taxation
· Tax system has been rebuilt. You now pay at the house sign for up to 20 days of taxes. The money will instantly be removed from you character and each hour that elapses the house will consume this money to pay taxes. As before, if the house can't pay taxes HP will start to decrease until after 10 days it is finally destroyed.

Town / Global Changes / NPC
· New system the trade broker has been added. This NPC will sell your items for you. Players can filter items and buy them from the broker. You will currently be able to put max 5 items in each broker (see new skills). If someone buys your item from the broker you will get the payment in the mail of that same city.
· Stables now have a local cap of 5
· All banners now start off grey and need to be dyed.
· Blue Guards & NPCs will give murder counts just like players.
· World chest spawners are now spread throughout the world, they will drop common to extremely rare items, these chests re-spawn over time. Some of them you can lock-pick, others require the correct key to open.
· Support added for more advanced NPC interaction (more dynamic conversation trees).
· Added improved support for unique armor(s).
· Added several new unique weapons.
· Added several new unique armor sets.
· Added support for "Illegal items". Guards will now and then scan for players that have illegal items. If they find someone they will tell him to stop, if he does they will run up to him and start a conversation where the player can then chose what to do.
· Suicide will no longer give you the ability to give out murdercounts.
· Default carcass size for all creatures have been reduced. Creatures with a higher level will still have around the old amount of carcass in them.
· Vendor will now automatically give back the amount of currency that differs in the trade.
· Optimized the sending of new clients/NPCs to clients. Data about NPCs/clients will now be sent in a better way. This means that you will see more "default" named NPC's but this will cut down on the clients stress when loading multiple new NPCs and clients.
· The deposit for a task is no longer twice the deposit.
· New Simple axe now use a custom model rather than using a mesh created using the crafting system

Combat
· Added new combat moves.
· Stamina-regen penalties for wearing armor with skills have been decreased.
· Prediction tweaked.
· Weapons now correctly take durability damage based on the defence of the ai.
· Added support for fist-weapons.
· Worn short sword now has a custom mesh.
· Update trace-calculations for unique (pre-made) weapons.
· The velocity mod for riding and hitting someone with a melee weapon is now more correctly calculated.
· Improved sound feedback when you get hit.
· The over-head swing knockdown chance and force is now governed by how much blunt damage the weapon does, rather than being random.


Territory Control
· Added Black List. Access a pylon and then add a character name to the black list to ban him. A black listed player will be flagged grey after 30 seconds in a black listed zone. Beware!
· The map has been removed from the tower UI. The entire UI has also been simplified and a new "Last Round" info has been added to make it easier for players to keep track of what happens to their towers.

Cooking
· You can now name your cooked meals.

Potions
· You can now control how much you want to drink out of a full potion. Simply trigger drinking, a small timer will show up in the lower right hand of the screen, trigger drinking again and another icon will appear. Once the icons run out you will drink the amount 2 * the number of icons. So to quickly drink 6 ‘doses’, trigger drinking 3 times.
· You can now name your potions.
· Potion icons now get a dynamically generated icon colored by the ingredients used to make them. This same color will also be used when dyeing armors or clothes


Taming
· You can now tame in combat mode.
· We have improved the following behaviours that pets use. They will now try to stay more out of the way.
· Taming now takes a little more time.

Mounts
· Mounts now have a larger step-up than a player, meaning they can "step up" on more things without stopping.
· Mounts now get less debuff/buff on speed when moving uphill and downhill.
· The move speed of horses has been unified a bit making the differences in speed a little more unified between the horses. Please note that swift riding and riding greatly increase the speed still.
· A mount’s size will no longer affect its speed as much.

Guilds
· Lifting your guildstone will now auto surrender all of your wars.
· You can no longer do long-distance guild invites/kicks without having a guildstone placed.
· House-Friends can now upgrade houses.


Fixes
Fixed issues with NPCs doing the "full spin" when being activated.
Priest resurrecting players will now also trigger the resurrect effect.
Clamped max fps to avoid de-sync between rendering and code-logic.
Fixed issues where animation speeds for movement would de-sync due to player/creature draw scale.
Fixed a glitch that happened if you got pushed and then tried to regain HP.
Fixed a couple of typos (added a few, we’ll get to them).
Corpses now interact with water in a better way.
Made some general fixes to the spawning of loot-bags. Loot bags should now spawn in more reachable areas.
Fixed issue that could make the wrong effect play when a player gained health.
Character selection now reflects your characters flag.
Dynamic Lights can no longer be turned off in the .ini file.
Earthquake now connects with non-players too.
Fixed issue with ragdolls spawning in mid-air.
Fists no longer cause handle hits.
Updated and fixed the size and length of almost every weapon head/handle in the game to better match the mesh of that handle/head and improving the hit-detection to be much more "WYSIWYG".
Fixed blunt heads they now correctly trigger a blunt client effect.
You can no longer use combat skills while having a weapon charged.
Creating a 2handed short handle without a head no longer gives you a weapon that can be dual-wielded with the spear animations.
Fixed a bug that could cause you to be unable to use a combat-skill unless you first swing a normal swing.
Fixed a couple of typos with the basic-vendors.
Player-torches have had their light radius/falloff changed.
Fixed issues with house placing that didn’t work due to you or someone else being too close to the house spot.
Possible fix for walls that ended up having all their chests locked upon construction.
Modules for black towers should now work as intended.
Fixed issue where your character sheet wouldn't correctly show the face of your character.
You should now start being dead where you died rather than where your body ended up. This is a changed aimed at fixing issues with ragdolls ending up in strange places.
Chests and doors should now correctly revert to being unlocked when a house/gate is destroyed.
New Rags should now have their correct icons.
Changed the message you get when you fail to login due to password/username or no active sub.
Fixed several instances of auto-run turning off due to UI opening etc.
Changed the text you get from trying to whisper someone who is not online. This stops people trying to whisper random people to get information about if they are online or not.
Banner icons correctly reflect the color they are made out of.
"This resource is almost depleted." Will now show up when it's 95% depleted rather than 80%.
Fixed issues where some skills would not report the correct level when used on the server.
Cleaned up and fixed issues with the navmesh-generation. This should make it a lot easier for AI to find paths in complicated meshes.
Player to bridge interaction distance increased.
Added support for pressing R while targeting a player to start a trade.
Some icon art is missing we are currently adding these. 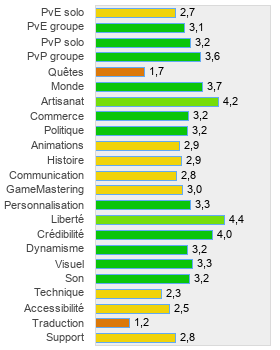